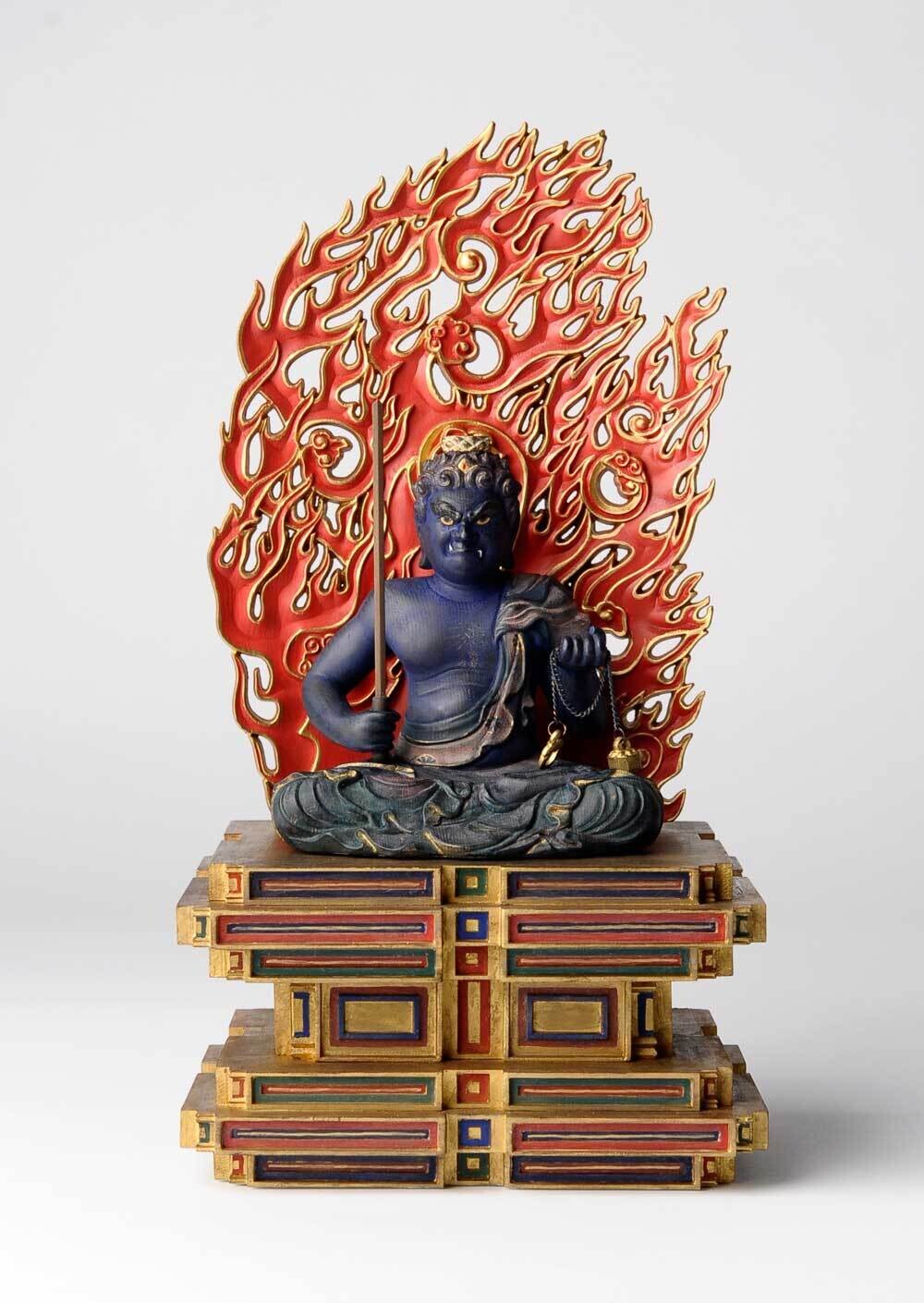 Famous for his battle standards quoting from Sun Tzu's The Art of War, Takeda Shingen was the 19th family head of the Takeda Clan. In 1559, at the age of 39, he became a monk and was afterward known by the Buddhist name Tokueiken Shingen. A resourceful tactician, Shingen built his position by fighting battles that he couldn't lose, listening closely to the advice of his vassals and building consensus. His armies were high in morale and bestowed upon themselves the title of "strongest under heaven", a reputation which soon spread. Shingen also had a statue of Fudo Myo-o built in his image

This statue still stands today in the family temple of Tokueiken Shingen. It is known by the name Takeda Fudoson and is said that it was sculpted in the year 1551, when Shingen was 31 years old. In that year, Shingen earned the rank of high priest of Mount Hiei and, to commemorate the honor, the famous Buddhist sculptor Kunai-kyo Kosho was invited from Kyoto to create a life-sized statue in his image. Kosho began the work standing opposite of Shingen and it is said that he did not originally intend to express his visage as Fudo Myo-o, but that the image gradually moved in that direction as his sculpting progressed. This can be seen as a reflection of the majesty Shingen embodied

According to the Koyo Gunkan, a record which chronicles the exploits of the Takeda clan, Shingen conducted the ritual shaving of his head in front of the statue and the hair was burned and mixed with lacquer, in order that he could spread it himself on the bust of the statue, adding a layer of color. The family temple where the statue resides was twice burned down, in 1582 and during the Meiji era, but the statue itself was miraculously untouched, leading to the belief that the statue grants miraculous benefits, including good fortune, success in one's pursuits, and disaster prevention

In recreating this statue, Butuzou World not only mimicked its superficial structure, but also made maximum use of the brand's many years of know-how to express the grandeur and strength of the original work, carrying out many revisions of the base mold to capture its facial expressions, overall balance, and power. In terms of color, as well, the team went through many stages of trial and error to recreate the blue skin which is symbolic of Fudo Myo-o and its overall saturation. Approximately one year of work was necessary before completing a satisfactory prototype. Each edition of the final product was then painted diligently for 1,200 minutes at the production studio of the sister brand, Isumu

The creation of a replica of this statue was commissioned to Ye Zhiyuan, a master in the Chinese carving world, and painted with supervision by Chihiro Takamura, one of the leading practitioners of Buddhist statue painting, to replicate its ancient feel

About Chihiro Takamura: Born in Tokyo in 1962, she entered Joshibi University of Art and Design (majoring in oil-painting) after high school graduation. In 1987, she was taken in as a student by Fuzan Hirano, a master of colored woodcraft. For the next 20 years, she devoted herself to her craft and began painting wooden statues based in Buddhist imagery and Japanese classics. More recently, she independently established the Chihiro Takamura Painting Institute. Her diverse creative talent ranges from familiar imagery to works of profound artistic merit.. In examining the works of Chihiro Takamura, it is worth noting that up until the Edo Period it was normal to apply color to Buddhist statues, but this changed during the Meiji Period when the formalistic ideas of Western Sculpture became pervasive and the coloring of Buddhist statues stopped. In contrast to such climate of the times, the revival of ancient Japanese colored wood carving was made possible largely due to the efforts of Denchu Hiragushi, a giant of Japanese sculpture world who received the Order of Culture. Denchu left behind many famous works and the color work for these works were mostly taken charge of by the colorist Fuzan Hirano. Chihiro Takamura is a legitimate successor of Fuzan and is the foremost figure in the coloring of Buddhist statues today.