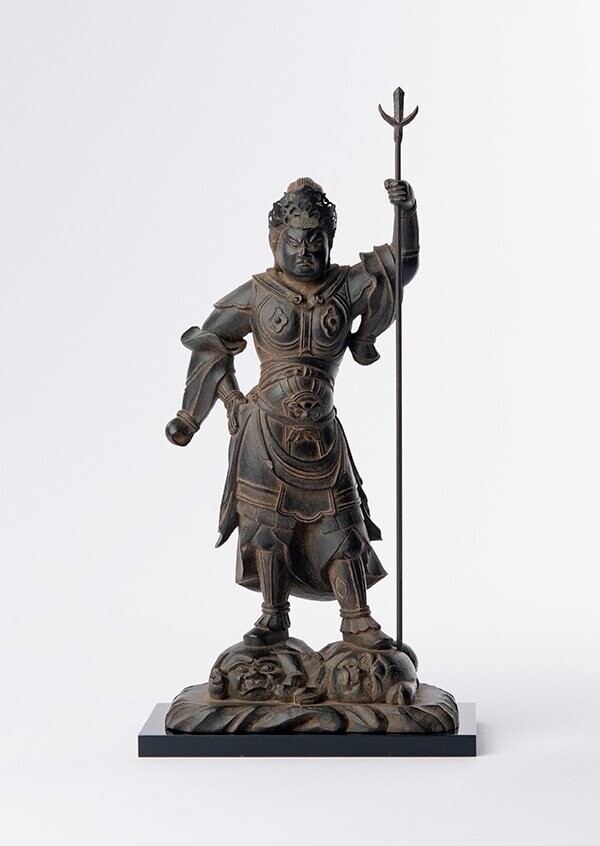 Kenshin Uesugi's first victory as a general at the tender age of 14 was only the first of 70 more engagements he would face before the age of 50, his otherwise unblemished record marred by only 2 losses. His 97% rate of victory far outpaced his peers during the Warring States period, for which many hail Kenshin Uesugi as the greatest general to have ever lived. The source of his seemingly unending success in war is said to be attributed to his passionate devotion to Bisyamon-ten.

As a symbol of his faith, Kenshin established a sanctuary dubbed Bisyamon-maru in his home of Kasugayama Castle in Echigo prefecture. There, he built a temple in his honor, adorning it with paintings and statues in the deity's image. Within this collection was a statue of Bisyamon-ten that measured over 30 cm tall.

Neither the tumult of the time nor the tenuous state of Echigo itself afforded Kenshin a chance to catch his breath, instead ushering the general from one battleground to another. During one brief period of respite, he had returned home to Kasugayama Castle and was in the midst of his devotions to Bisyamon-ten, when he caught sight of a tiny pair of muddy footprints in the temple. He curiously followed the footprints to find that they led directly to the statue of Bisyamon-ten that he had had enshrined there. Kenshin rejoiced, proclaiming "Bisyamon-ten joined me in battle!" and the statue became known as "Doroashi Bisyamon-ten," or "Muddy-footed Bisyamonten," in the Uesugi household forevermore.

The "Doro-ashi Bisyamon-ten" that resides in Kenshin's ancestral tomb—even to this day—is made entirely of bronze. With its dignified expression and grave appearance, it is assumed to have been the work of a master craftsman of the Kamakura period. To reproduce this masterpiece, Butuzou World commissioned a leading practitioner of the first traditional craft nationally recognized by Japan, Takaoka coppersmithing. Painstakingly crafted over the course of 10 months, this statue eschews the two-storied pagoda Bisyamon-ten is typically displayed alongside, instead depicting Doro-ashi Bisyamonten in all of his original glory, hoisting a trident in one hand with the other confidently placed on his hip, fully prepared to trample any unsuspecting demon underfoot. His imposing figure calls to mind Kenshin himself, the man who struck awe in the hearts of many as a general.

We wholeheartedly recommend this masterpiece to all those for whom Kenshin Uesugi holds a special place in their heart. In Buddhism, Bisyamon-ten is known as the Guardian of the North, while inviting perfect health and financial fortune as as one of the Seven Lucky Gods. Should you choose to display him in honor of your house guardian, he will surely invite prosperity for many years to come.