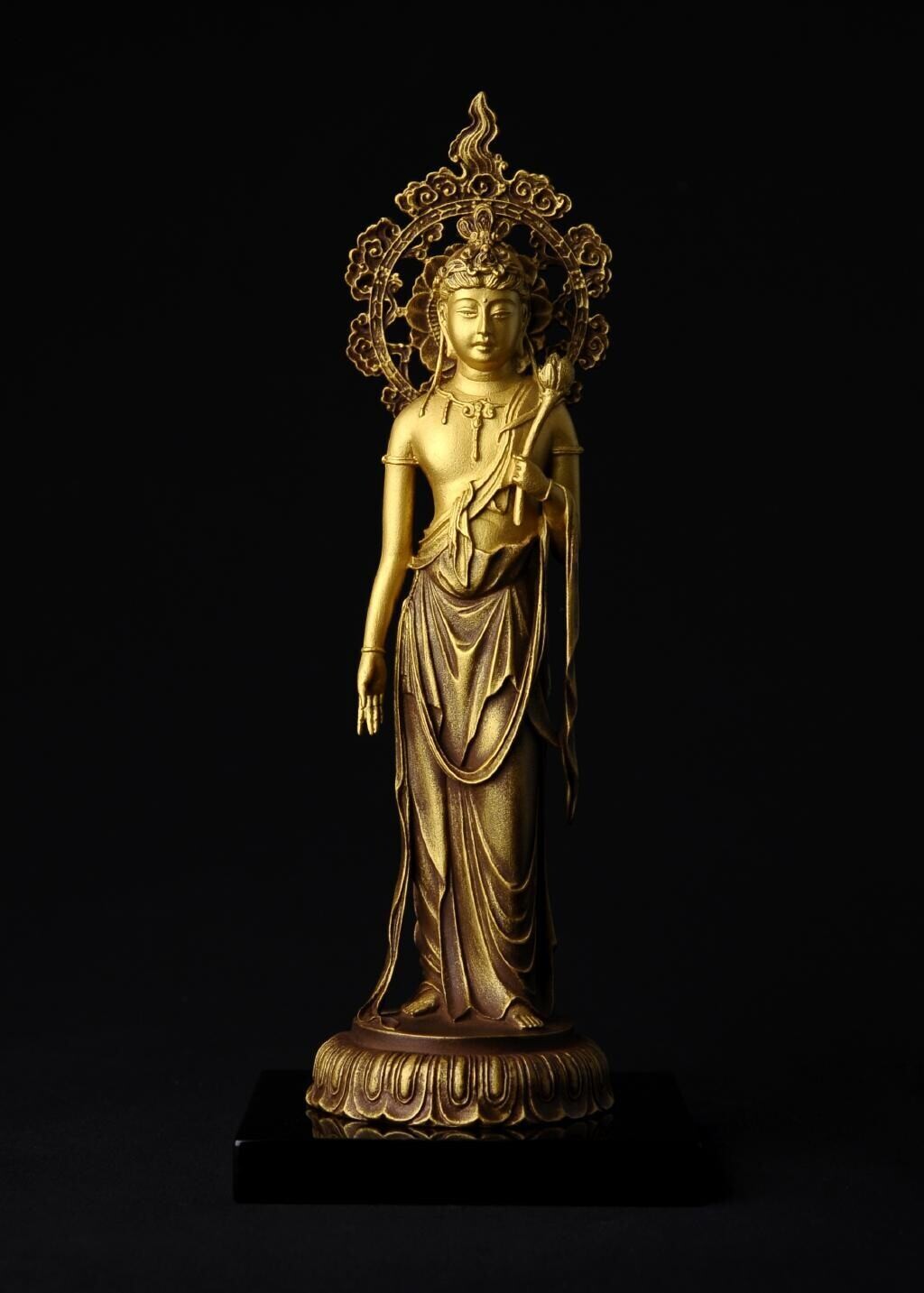 A full reproduction of a piece by the celebrated sculptor Koun Takamura. This beautiful figure of a bodhisattva (Buddhist saint) casts its merciful gaze upon all living things. On the pedestal is Koun's signature. In addition, it will be sent with a paulownia wood box which has had Koun's seal applied to it by permission of the Takamura family. This artwork and box together have two signatures to certify it is a genuine product based on Koun's model.

Koun was born in Edo, the son of a common townsman. In 1863 he was apprenticed to Buddhist image maker Toun Takamura, and later he took the name Takamura when adopted by Toun's sister. After the Meiji restoration and the rise of the anti-Buddhism movement work in Buddhist imagery dried up, and because of the vogue for ivory sculpture for export wood carving also went into decline, meaning that Koun struggled to earn a living. During that period he devoted himself to wood carving and studied western art, and by incorporating realism into his work he was able to revive the art of wood carving. He played an important role in passing on the traditional woodcraft techniques of the Edo period to the modern era.

In 1889 started work at the Tokyo School of Fine Arts. The following year became professor of sculpture. On 2nd October that year was made an artist of the imperial household. In 1893 exhibited "Old Monkey" at the Chicago World's Fair. In 1900 exhibited "Mountain Witch" at the Paris Exposition. Retired from Tokyo School of Fine Arts in 1926 and became honorary professor.

This statue will be made after your order, using Takaoka bronze sculpting techniques. With a 400 year history of manufacturing copperware, the city of Takaoka is Japan's foremost producer of cast sculpted Buddhist statues. Statues crafted here are painstakingly molded, cast, finished, and colored by the hands of craftsmen who have inherited traditional manufacturing techniques. Historically, Takaoka copperware was founded in 1611 when Toshinaga Maeda (前田利長), second lord of the Kaga fiefdom (加賀藩) and the man who would later become the founding father of Takaoka, sent word to Tannan in the Kawachi Province (河内国丹南郡), known as the birthplace of casting, to send seven of their finest casting masters to come open a foundry in Kanayamachi (金屋町) in a bid to promote the prosperity of his people. These efforts were focused primarily on iron casting at the time, but by the middle of the Edo period, they began to see success in the field of copper casting. As their prowess in this craft further advanced going into the Meiji period, their works were showcased at exhibitions to enjoy international acclaim, with their artistic copperwares going on to carve out a niche for them in the world of exports. In 1975, Takaoka copperware received primary designation for Japan’s Nationally Designated Traditional Craft Products.