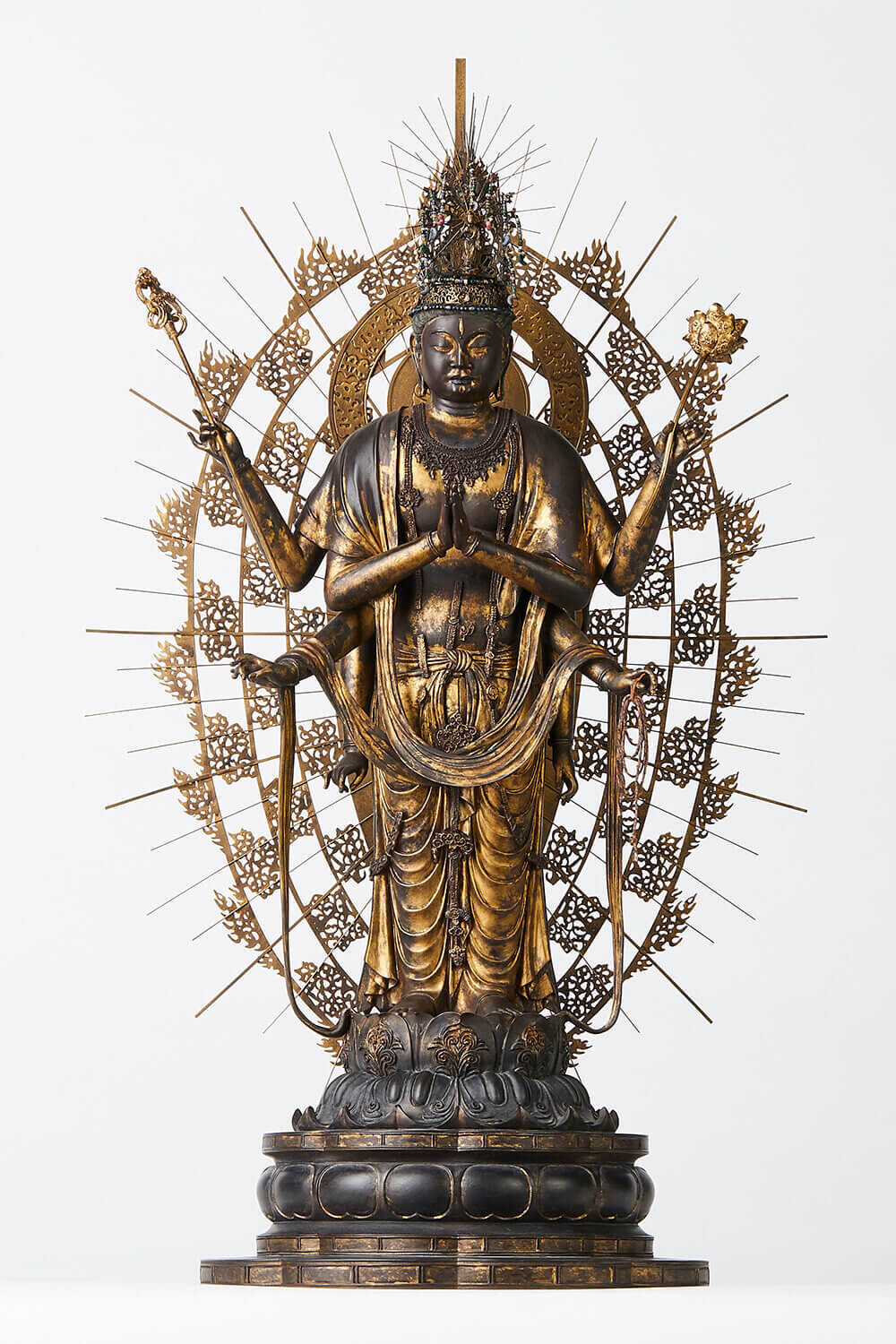 This is a replica of the majestic and magnificently decorated National Treasure, Fuku Kensaku Kannon. Standing over 3 meters tall, the magnificent original statue features a diadem adorned with over 20,000 precious stones, and is truly an awe-inspiring sight to behold

Fuku Kensaku Kannon is always depicted carrying a lasso called a kensaku, which is used by the deity to deliver sentient beings from suffering. Because it never misses its mark, it has been given the name Fuku Kensaku (Amoghapasa in the original Sanskrit), which literally means "unfailing rope." Fuku Kensaku Kannon is a manifestation of the bodhisattva Avalokitesvara and has been worshiped since the 6th century. The deity was introduced to Japan by the high Buddhist priest Genbo (died 746) upon his return from Tang Dynasty-era China in March 735

The upper left hand (facing the statue) holds a khakkhara, or "alarm staff." The khakkhara is a staff with iron rings at the top which is carried by a monk when he sets out on a journey or to ask for alms. The sound made by the rings when the staff hits the ground symbolizes wisdom and the grace of the Buddha

The gesture of the lowermost left hand, called Varada Mudra, is considered to be a gesture of granting wishes. It is said to release sentient beings from suffering and to grant tranquility and comfort. A Cintamani Stone is clasped between the model's praying hands. This is said to signify the memory of the deceased son of the Emperor Shoumu, by whose order the statue was created. The Japanese expression which literally translates to "ball in the hand" has the figurative meaning of "beloved child"

As it was not popularized by Fujiwara as a guardian statue for spiritual protection of the state, there are few examples of Fuku Kensaku Kannon. The graces of Fuku Kensaku Kannon are extolled in the Fuku Kensaku Shinpen Shingon Sutra and other related sutras, primarily the "20 Victories" (blessings of 20 seeds) that relate to good health and healing from sickness, and the eight dharmas (prosperity and happiness of 8 seeds) that relate to passing into the realm of the Buddha after a peaceful death. It is said that preparing the mind and body and chanting the mantras and sutras will result in a healthy body that will not contract disease, being beloved by all, incurring no hardships, never feeling hunger or thirst, banishing impure thoughts, and becoming a beautiful person