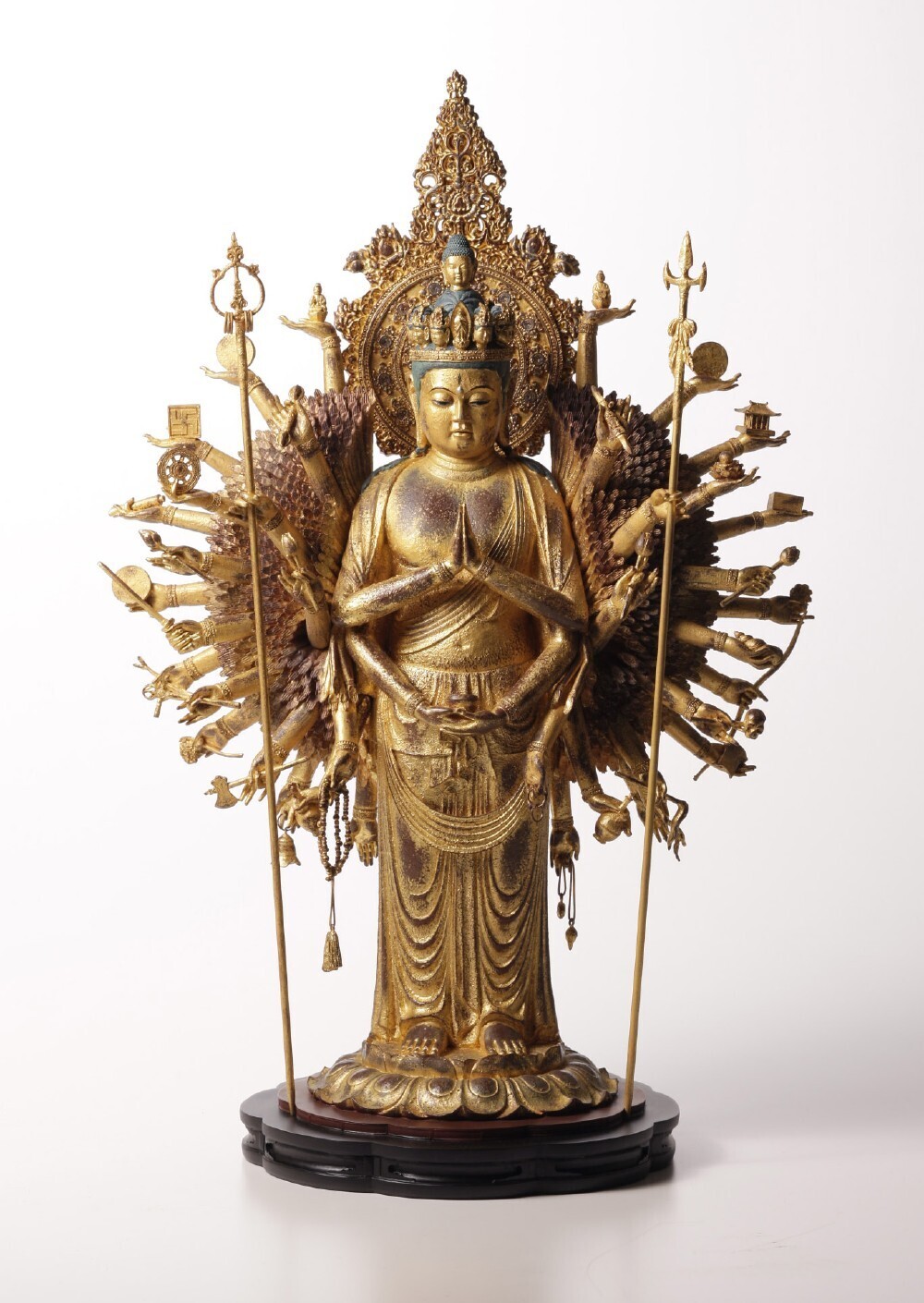 This statue is a replica of the Japanese national treasure in Nara. This replica is one of the most luxurious statues from the Isumu brand; after applying 120 gold leaves on the statue, these gold leaves were actually peeled off in order to recreate the feeling of history behind the original statue

Senju Kannon finds the ones who are suffering with his eleven faces and saves them with his thousand arms, which represent infinite mercy. The smaller arms are often omitted in representations of Guanyin, and this statue is very unusual in that it actually features all the thousand arms

The formal name of Senju Kannon (Thousand-Armed Kannon) is Juichimen Senju Sengen Jizai Bosatsu. Due to the number of his pious deeds being particularly large even among the Kannon Bosatsu, he is also known by the names of Kannon no Ou (King Kannon) and Renge Ou. He is counted as being among the Six Forms of Kannon that save all living things. Out of the six realms— Nakara Realm, Hungry Ghost Realm, Animal Realm, Asura Realm, Human Realm, and Deva Realm—he is said to save those lost in the Hungry Ghost Realm

His appearance represents the compassion of Kannon Bosatsu. The 1,000 arms symbolize the vast and infinite mercy of his heart, as he reaches out with hands of salvation to people without exception, no matter what kind of person they may be. In his palms, there are eyes, which represents the wisdom with which he teaches and leads mankind

In his 42 arms he holds a variety of ritual implements, and above his head, there are ten faces looking out; with these, he takes away all manner of suffering. This form is that which Kannon received when he asked of Nyorai, "I wish for a thousand arms and a thousand eyes with which to save all living things." The displaying of Amida Nyorai on the top of his head and on his forehead shows that he has come to this world as Nyorai's messenger to save us

Belief in Senju Kannon was passed on to Japan from China in the first half of the 8th century, during the Nara period. In the year of Reiki 2 (716), the monk Genbo traveled to China as part of an envoy to the Tang Dynasty, staying in the city of Chang'an for almost 20 years. In Tenpyou 6 (734), he returned to Japan, where he taught of the belief in Senju Kannon that was so popular in China at the time. In Tenpyou 7 (735), the Senju Kannon sutras, beginning with the Senju Sengen sutras, that had been translated into Chinese by the T'ang Dynasty in the first half of the 8th century, began to be transcribed one after another in Japan as well. Within a short time, belief in Senju Kannon came to prosper in Japan

It is common with figures of Senju Kannon for the 1,000 arms to be represented in reality by 42 arms; however, this is a precious example of a work with all 1,000 arms. Although it is thought that at the time of completion it actually had 1,000 arms, at present it has a total of 953 arms—42 large and 911 small—with the rest having been lost. The individually crafted arms have been arranged to form a fan shape in order to unify them with the halo, splendidly symbolizing the spreading of Kannon Bosatsu's mercy