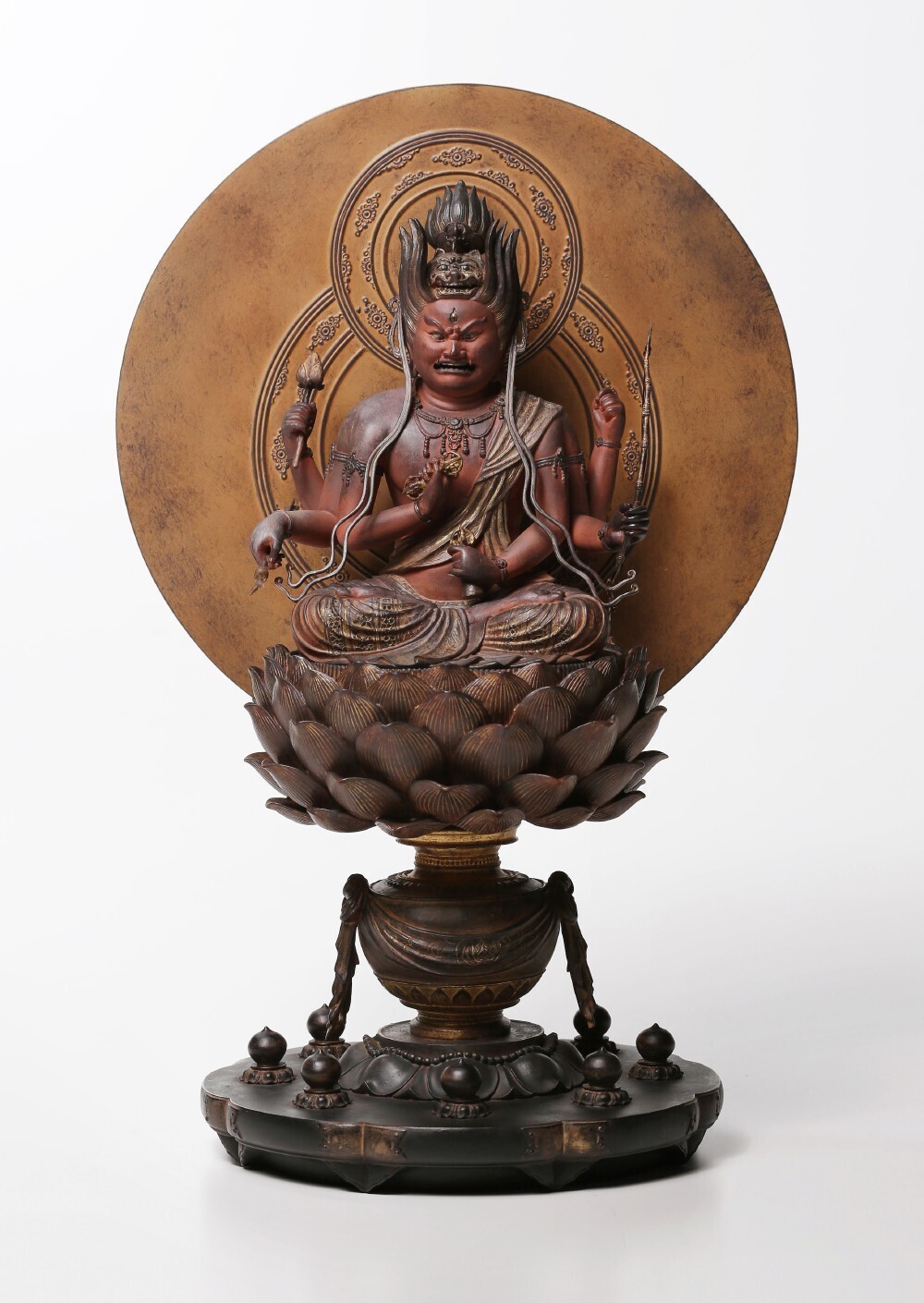 This statue is a replica of the original statue in Saidai-ji Temple in Nara, Japan. The original was created by the Buddhist sculptor Zenen in 1247. Although the original statue is inspired by Unkei’s style (Unkei was a Japanese sculptor of the Kei school that flourished during the Kamakura period (1185-1333), Zenen showed much originality in the way the sculptor depicted Aizen Myo-o’s attire and sophisticated appearance. In addition, given that the statue was a hibitsu (i.e,. Japanese Buddhist statues hidden and concealed from public view), the original coloring and gold leaves of the statue are luckily still largely intact to this date.

Moreover, what is interesting about Aizen Myo-o is that its core teaching comprises the notion that lust is something that should not be denied, and instead should be translated into a desire to improve oneself and therefore to satori, the Japanese Buddhist term for awakening, comprehension or understanding. Aizen Myo-o’s furious look and red appearance is a manifestation of its extremely strong will to conquer lust. As such, although originally Aizen Myo-o was a Buddha which was believed to protect the country and lead a country to win wars, among the common people it was believed that Aizen Myo-o would help them fulfill their love wishes.

In terms of Aizen Myo-o’s appearances, the most prominent characteristic is the fact that it is sitting on a lotus flower that is blooming on top of a pot that contains the wisdom of satori and that it wears a lion crown with five keys, which indicates Aizen Myo-o’s strong will to achieve satori. Furthermore, you might notice that the statue’s left hand in the very back does not hold anything. It is said that this is because the hand was left empty for curses to defeat the enemy or the names of the people with whom you wish your love to be fulfilled. For example, it is depicted in one of the Japanese stories that Emperor Go-Sanjō (1034-1073) actually let the Buddhist statue hold a paper with the name of Emperor Go-Reizei (1045-1068), with the goal of cursing him and ascending to the throne.