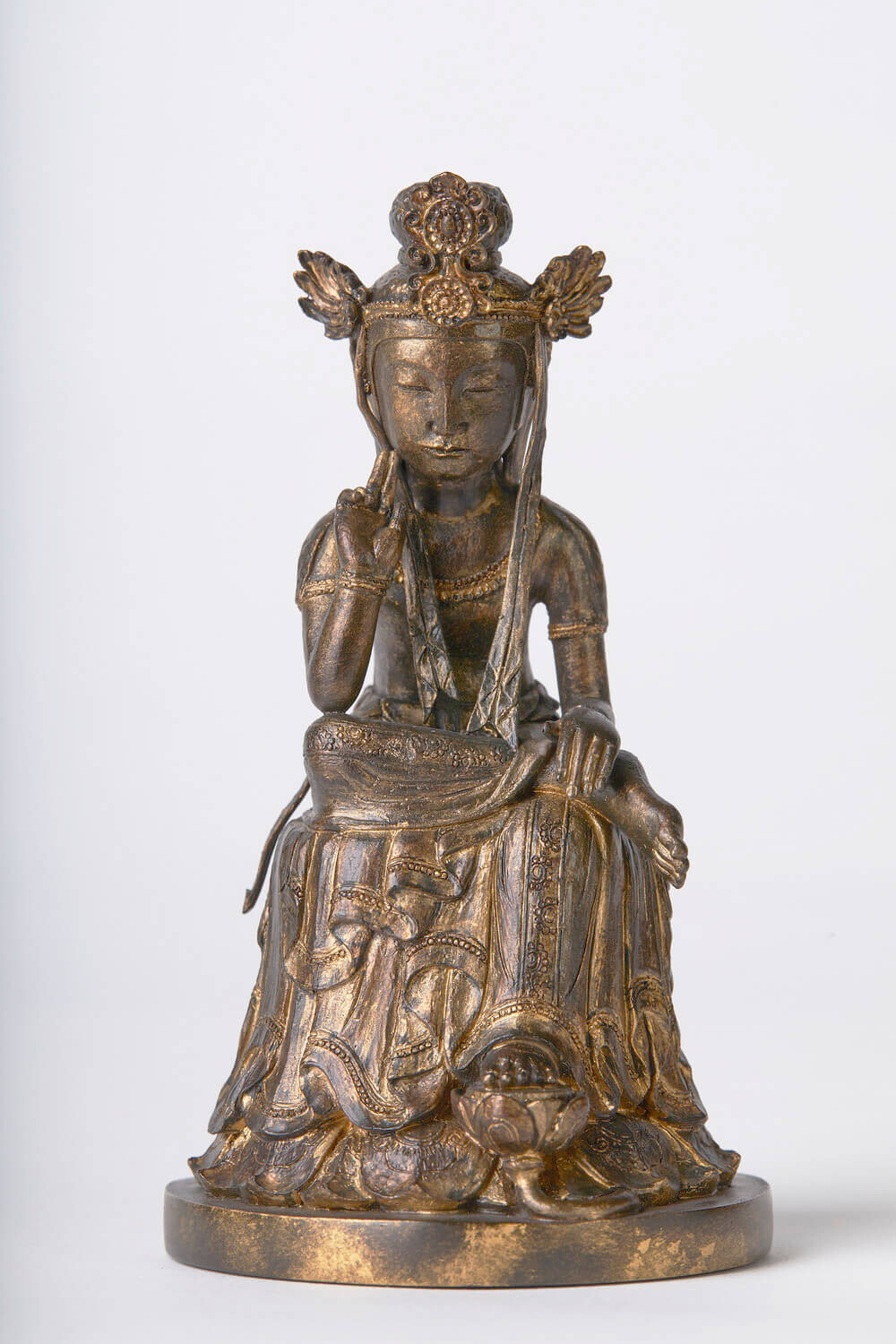 A small, gilt bronze Buddha statue was discovered in the warehouse of a temple in Osaka in 1918. This statue suddenly appeared in Japanese art history and was designated as one of the nation's important cultural assets as a Maitreya from the Hakuho period (the latter part of the Asuka period). It is withheld from public view, only being unveiled once a month (on the 18th). The original statue's lovely and fresh molding has been reproduced into a size that fits into the palm of one's hand, with every bit of charm with a height of just 11 centimeters, made with the affirmed presence of the gilt bronze Buddha that has seen over than 1,350 years pass

The original statue is said to have been influenced by art from the Sui dynasty, and has the signature year "丙寅二年" (666) inscribed in the frame of its pedestal. This is the period when Hakuho culture was just starting to bud. From the start of the Asuka period, when Buddhism spread, to the end of the period, the style of Buddhist statues transitioned from a stiff literary style to a round, swelling literary style, and this statue is spoken of as a exemplar work. It is thought to have been a pioneering molding at the time, and is the oldest example of a work specified as a "Maitreya". It is a Maitreya statue where you can experience a breath of the broad-minded Hakuho culture

Attached above the head of the statue is an ornament called a sanmen toshoku (three-sided head ornament). It is in the shape of diadems seen on Buddhist statues from after the Hakuho period. In the front is a large ornament with flowers layered up and down, and the sides layer warabide (a coiling pattern where the edges of curves spiral inwards like bracken leaves) molded like wings. Additionally, there is a chiseled engraving of a pattern of joined circles which appears on the diadem stand and personal ornaments, arm and elbow bracelets, and the edge of the hem, affirming the presence of the statue. Above the line for both feet, a single vertical linked bead pattern is carved as a bodhisattva, displaying even more brilliance

There is a 62-character inscription written on the frame of the original statue's pedestal. As there are characters that are impossible to decipher, explanations are varied, but a description of "118 people, including monks, intellectuals, and other contributors, prayed for the empress consort and emperor's recovery from illness by creating a Maitreya statue" has been written. However, to this day, the actual year it was created in, the temple it was passed down to, and many other mysteries remain unsolved. From the fact that there was no emperor on enthroned in the year 666 inscribed, we also do not know who the "empress consort and emperor" indicates

The original statue is an important cultural asset, known as the "Gilt Bronze Maitreya Half-Lotus Position Statue." In the earlier half of the Asuka period in Japan, Buddha statue creation was also gaining speed, but as the latter half of the period approached, showy ornamentation and expressions of soft bodies become prominent. The original statue is spoken of as a criterion work from that new era. With its large head ornaments and hem pattern thought to be influenced by the Sui dynasty, this statue, while small, is a masterpiece with many highlights