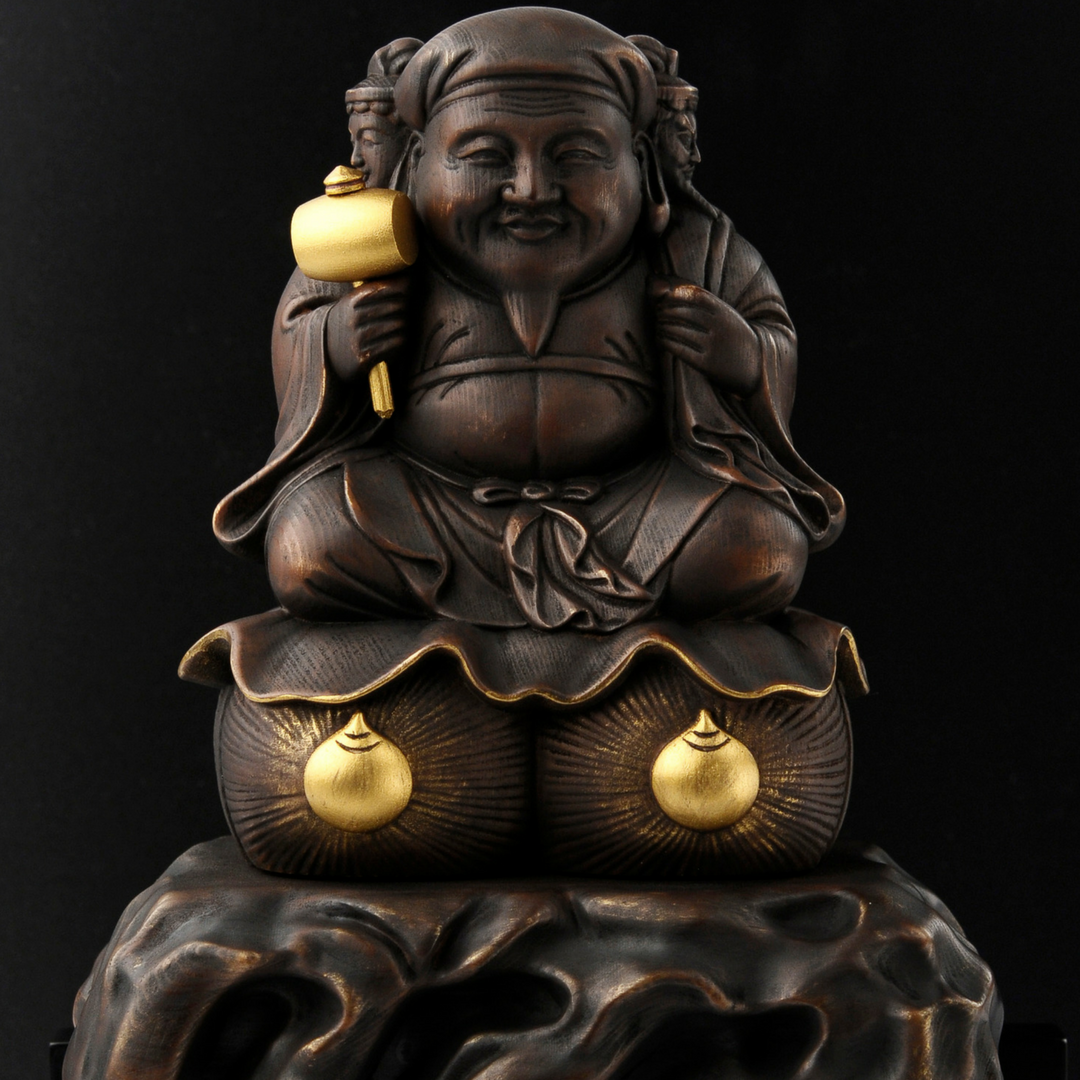 This three-faced Daikokuten is almost the exact size as possessed by Hideyoshi Toyotomi, feudal lord and chief Imperial minister in the 16th-century. Please put it facing south along with the included talisman. Facing west in the direction of Sukhavati is also acceptable. For specific blessings: place it on a safe for financial blessing, in the kitchen or bedroom to ensure family safety, or at the entrance to ward off evil and spirits. Please avoid placing it on the floor in any case. This item has received an eye-opening ceremony at Entoku-in in Kodai-ji temple (a proof of ceremony certificate is included).

Note that the proof of ceremony reads:

The first and last lines mean eye-opening-ceremony certificate and the temple name, respectively. The three lines in the middle mean the temple chose a good day and time to conduct the ceremony, and such time was allocated for the statue's eternal blessing.

A meeting with the three-faced Daikoku-ten is said to be behind Hideyoshi's success. The three-faced Daikokuten to this day remains enshrined at Entoku-in, the family-temple of Toyotomi Hideyoshi, located in Kyoto's Jubuzan Kodai-ji. Hideyoshi regularly carried this precious statue and eventually became the nation ruler.

A description of the origins of the three-faced Daikokuten handed down to Entoku-in reads: When young, Hideyoshi looked at an image of the three-faced Daikokuten and prayed, "If I am to become successful and renowned, break into pieces. Otherwise, retain your form." He then threw the statue, which shattered into pieces. Hideyoshi was overjoyed, having a sculptor carve a statue for personal worship, which became the source of his power. Hideyoshi experienced four miracles following this.

The first was becoming sandal-bearer for Oda Nobunaga; despite being menial, this role opened many doors for him. The second was his marriage to his great wife Nene. The third was his successful performance at Siege of Kanegasaki as rearguard of Nobunaga when Nobunaga was betrayed by the Azai forces. The fourth was the miracle of the great return from Chuugoku, where, following the Honnoji Incident, the 200 km journey from Takamatsu Castle in Bitchu to Yamazaki Castle was complete in just ten days on foot, and Akechi Mitsuhide's forces were subjugated.

The three faces of the three-faced Daikokuten are: Daikokuten, the god who brings fortune in the areas of national defense and good harvests; Bisyamonten, the god who ensures victory and riches; and Benzaiten, who brings happiness and wealth. While each one is a powerful deva in their own right, together they form an all-powerful trinity of fortune. As a result of possessing the three-faced Daikokuten, Hideyoshi was blessed with success in battles (as rearguard at the Seige of Kanegasaki and defeating Akechi Mitsuhide following the great return from Chuugoku), fateful meetings (with Oda Nobunaga and Nene), and great wealth (controlled a vast amount of territory, and received large payments).

This item has received an eye-opening ceremony at Entoku-in in Kodai-ji temple (a proof of ceremony certificate is included). Kodai-ji was built at the request of Nene, the North Mandokoro, after receiving the name Kodai-in in 1603, to enshrine her husband Hideyoshi. In 1605, the open-court and front-garden of Fushimi Castle were relocated to present day Shimokawaracho. It is thought that Hideyoshi's personal three-faced Daikokuten was enshrined in the temple at this time. Nene spent her remaining 19 years of life here, passing away at the age of 77. During this time she was supported by her brother, Kinoshita Iesada, and his son, Toshifusa. In 1632, 9 years after the passing of Nene, Toshifusa changed the dwelling to Entoku-in in memorial of the Kinoshita family under the foundation of the Kodai-ji priest, Sankou.