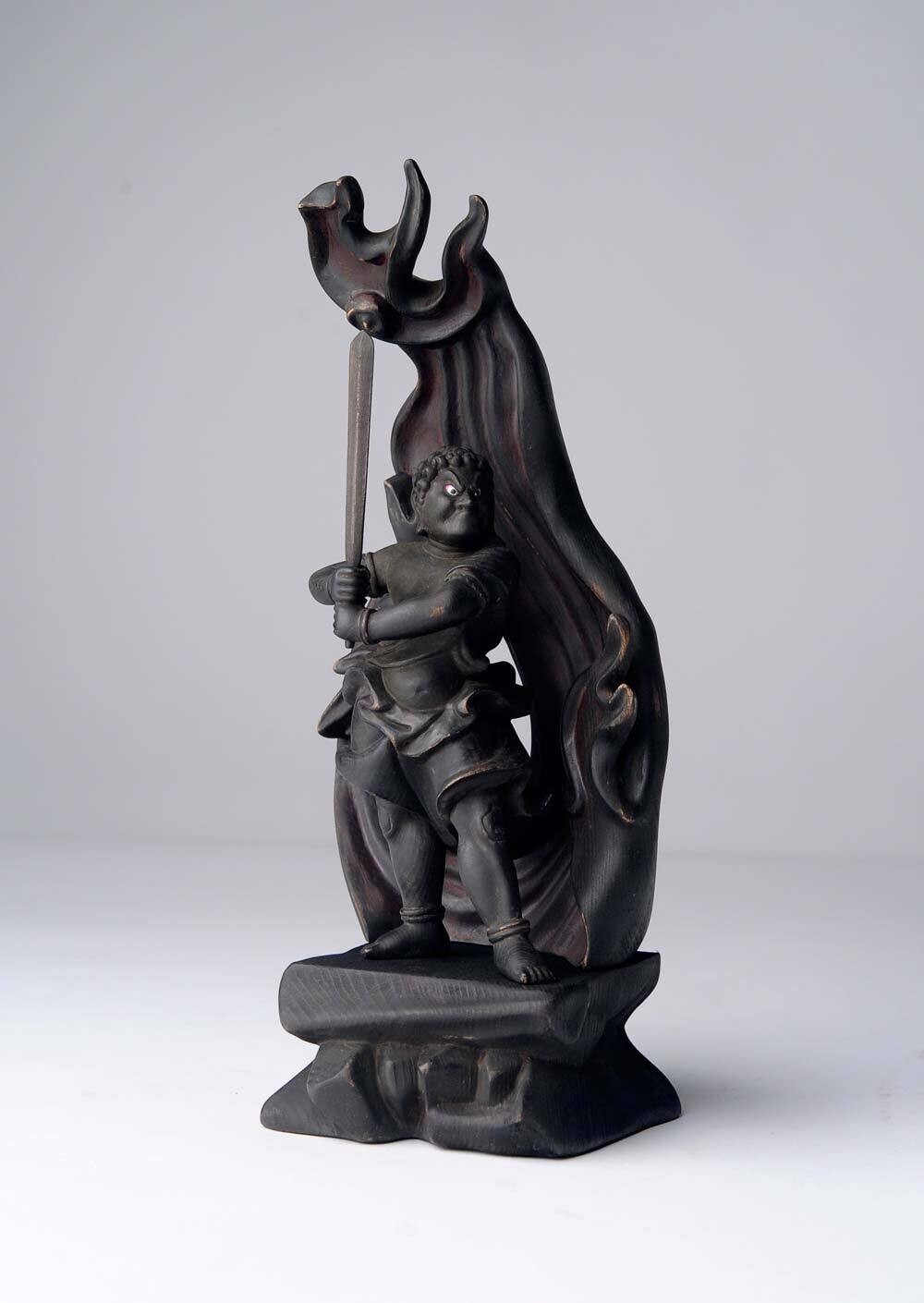 Unlike other depictions of Fudo Myoo, the deity is shown in this statue holding the Kurikara sword with both hands, reminiscent of the swordplay pose known as the hassou-no-kamae. When one gazes into Fudo Myoo's penetrating, imposing stare, it is no stretch to say it reflects Musashi's life which spanned 64 years. The creation of a replica of this statue was commissioned to Ye Zhiyuan, a master in the Chinese carving world, and painted with supervision by Chihiro Takamura, one of the leading practitioners of Buddhist statue painting, to replicate its ancient feel

Miyamoto Musashi, the founder of the Niten Ichi-ryū school of swordplay which employs two swords instead of one, was a swordsman of extraordinary renown and boasts a strong following to this day. In his final years, he practiced the art of the traditional tea ceremony, zen, painting, and calligraphy, much to the surprise of others. His paintings "Cormorant", "Shrike on a Weathered Branch" and "Pigeon on a Red Japanese Apricot" are important cultural artifacts, and also demonstrate a rare artistic talent. Among his collection of wooden statues was one of Fudo Myoo

Musashi Miyamoto's life was colored by an unblemished record of victory in 60 battles, including the legendary brawl with 70 members of the Yoshioka clan and his battle with Sasaki Kojiro on Ganryu Island. In his last 5 years, he sequestered himself in Reigando, a cave in Mount Kinbō in Kumamoto, where he penned "The Book of Five Rings," a dissertation of his strategies and the secrets of his swordplay. This book went on to transcend Musashi's original intent, and is now regarded as an effective guide for business strategies, mental training, and an all-around bible for efficient living. It was released in English in 1970 to record sales as "The Book of Five Rings," and can be found in Harvard Business School's curriculum and is otherwise read all around the world

As a philosopher, Musashi remains a popular fixture in novels, films, plays, and more recently in Japanese comics. This "Nenjibutsu" of Fudo Myoo, faithfully recreated from the one carved by Musashi Miyamoto, bears the soul of a master swordsman, and will certainly grant its owner the "ambition" to face the challenges of life

About Chihiro Takamura: Born in Tokyo in 1962, she entered Joshibi University of Art and Design (majoring in oil-painting) after high school graduation. In 1987, she was taken in as a student by Fuzan Hirano, a master of colored woodcraft. For the next 20 years, she devoted herself to her craft and began painting wooden statues based in Buddhist imagery and Japanese classics. More recently, she independently established the Chihiro Takamura Painting Institute. Her diverse creative talent ranges from familiar imagery to works of profound artistic merit. In examining the works of Chihiro Takamura, it is worth noting that up until the Edo Period it was normal to apply color to Buddhist statues, but this changed during the Meiji Period when the formalistic ideas of Western Sculpture became pervasive and the coloring of Buddhist statues stopped. In contrast to such climate of the times, the revival of ancient Japanese colored wood carving was made possible largely due to the efforts of Denchu Hiragushi, a giant of Japanese sculpture world who received the Order of Culture. Denchu left behind many famous works and the color work for these works were mostly taken charge of by the colorist Fuzan Hirano. Chihiro Takamura is a legitimate successor of Fuzan and is the foremost figure in the coloring of Buddhist statues today.